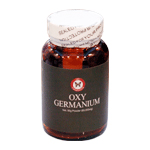 Germanium is a metalloid element - atomic number 32, atomic mass 72.59 - found in soil and plants. It is found in concentrations of 4,189 ppm in Korean ginseng, 754 ppm in garlic, 124 ppm in the fruit of the matrimony vine, 152 ppm in comfrey, 257 ppm in Rhizoma Menispermae, respectively.

This element has an interesting anecdote associated with its discovery. Mendeleeff, the creator of the original periodic table of the elements, left the 32nd spot in the table blank, predicting the existence of an element that will fill it. About 20 years later, the German scientist Dr. Wingura discovered an element with the properties that Mendeleeff had predicted, and named it Germanium.

Germanium has 32 electrons, and when it reacts with another substance, it loses one of the 4 electrons in its valence shell, which leaves an empty space known as a positive hole; this creates a kind of a positive-charge "trap" that invites another electron to fill it. Here, a kind of hypothesis was set up based upon the idea that we can expect what is known in physiology as dehydrogenation. Depending on how one looks at it, a living body can be seen as an amalgam of tiny corpuscles of electricity. Each organ and part functions as its own particular assemblage. Because of this each part has its own electric potential, and disease is the result of positive and negative potentials being out of sync. Electroencephalographs and electrocardiographs are machines that identify problems by measuring changes in electric potential, and Germanium has wondrous effects in correcting imbalance in electric potential.

That Germanium is a semi-conductor and not a metal is a physiologically expedient phenomenon as well. This is because each cell, including blood, has semi-conductive characteristics, and since semiconductors cannot coexist due to their electrical properties, there needs to be no concern that Germanium will accumulate within the body; and the fact that it cannot accumulate in the body means that no matter how much Germanium is ingested over however long a period, there cannot be any side effects because Germanium is always discharged from the body.